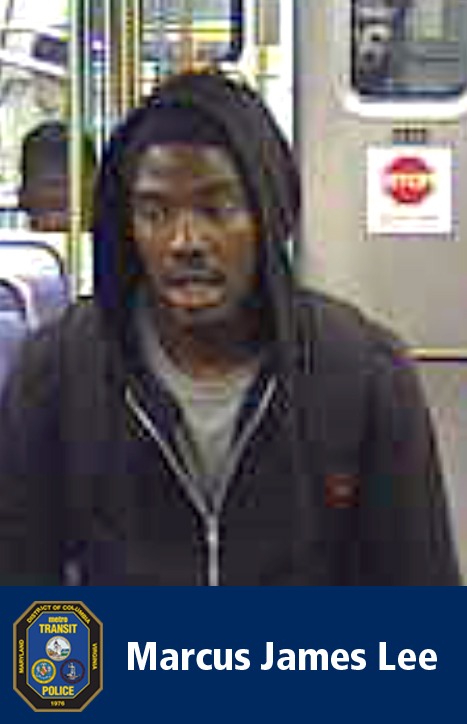 Metro Transit Police today arrested the first suspect wanted in connection with a strong-arm robbery of a passenger aboard a Red Line train Sunday afternoon. Marcus James Lee, 21, of Northeast DC, was arrested shortly before 2:30 p.m. today by the MTPD Warrant Squad. He is currently being held in D.C., pending extradition to Maryland where he will face two counts of Robbery-Strong Arm, and one count of second degree assault for an unrelated case involving a Ride-ON bus operator.

The Red Line robbery occurred around 5:40 p.m. Sunday aboard a train traveling in the direction of Glenmont. As the train approached Wheaton, four suspects approached the victim, an adult male, who was seated on the car. One suspect sat next to the victim and told the victim, “I need you to give me the password for that phone and look the other way, otherwise it will not end well for you.” The victim retained control of his phone, at which point multiple suspects began to punch the victim about his face and head. While getting punched, one of the suspects told the victim to “give me that damn phone!” The victim told police that he felt the suspects’ hands going through his pockets as he tried to defend himself. When the doors opened at Wheaton, the suspects ran off the train and out of the station. The victim was transported to a local hospital with non-life-threatening injuries. Several credit and debit cards were stolen from the victim’s pockets.

Metro Transit Police have identified all individuals involved in Sunday’s Wheaton case. Additional arrests are expected in the coming days.

Marcus James Lee was also linked by MTPD detectives to a second strong-arm robbery that occurred Sunday about two hours later aboard a Q1 Metrobus in Silver Spring. In that incident, an adult victim reported being assaulted from behind by two suspects who grabbed his iPhone. The suspects fled the bus at Colesville Road and Viers Mill Road. Police canvased the area but were unable to immediately locate the suspects. The victim was not seriously injured.