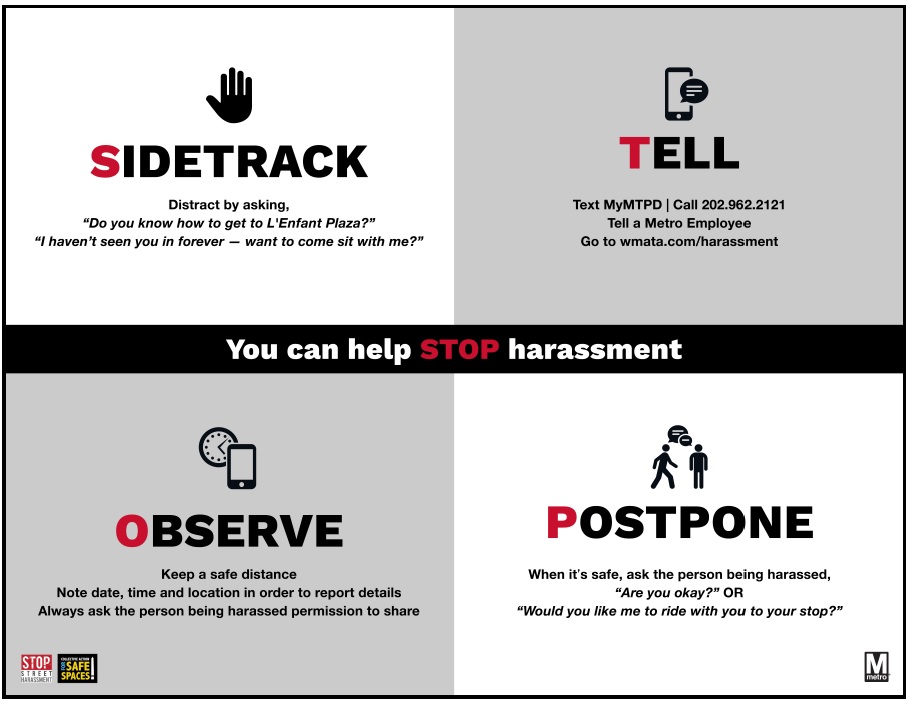 Metro today announced the launch of a new public awareness campaign to STOP harassment. The new ads will begin running in stations tomorrow in conjunction with Sexual Assault Awareness Month and Stop Street Harassment Week. The ads, developed in partnership with Stop Street Harassment and Collective Action for Safe Spaces (CASS), empowers riders to report and intervene if they witness or experience an incident of harassment. The campaign features the message “You can help STOP harassment” with four simple strategies that spell out STOP – Sidetrack, Tell, Observe and Postpone.

“Harassment of any kind is unacceptable in the Metro system,” said Metro Transit Police Chief Ron Pavlik. “It’s important for riders to have the tools to know how to report harassment and how they can help if they see it happening.”

The latest campaign is part of an ongoing effort that began in 2012 to raise awareness and combat sexual harassment in the Metro system. In a report last year, Understanding Sexual Harassment on Public Transportation, Metro found that familiarity with the campaign increased the likelihood of reporting incidents of harassment.

"Everyone can help make our transit system a more welcoming place by taking action when they witness sexual harassment. We hope this new PSA campaign can empower riders to know what to say and do in those situations," said Holly Kearl, founder of Stop Street Harassment.

“We're pleased to continue our partnership with WMATA to prevent and raise awareness about public gendered harassment and assault on public transportation. Whether you're waiting at a station, riding a bus, or walking in your Metro station, public transportation should be safe for everyone,” said Collective Action for Safe Spaces Interim Executive Director Alicia Sanchez Gill. “We are glad to see resources being put towards community-based solutions to creating safety, building a DC where everyone can and should feel responsible for making our communities safer.”

Metro has developed a variety of tools to provide a safe, convenient way to report incidents of harassment. Customers may text Metro Transit Police at MyMTPD or call 202-962-2121, tell a Metro employee or go to wmata.com/harassment.

In an effort to raise awareness, Metro Transit Police will be joined by volunteers from CASS, Stop Street Harassment and other community groups to provide information to customers during a high visibility outreach event Tuesday from 4:30 p.m. – 6:30 p.m. at the following locations: