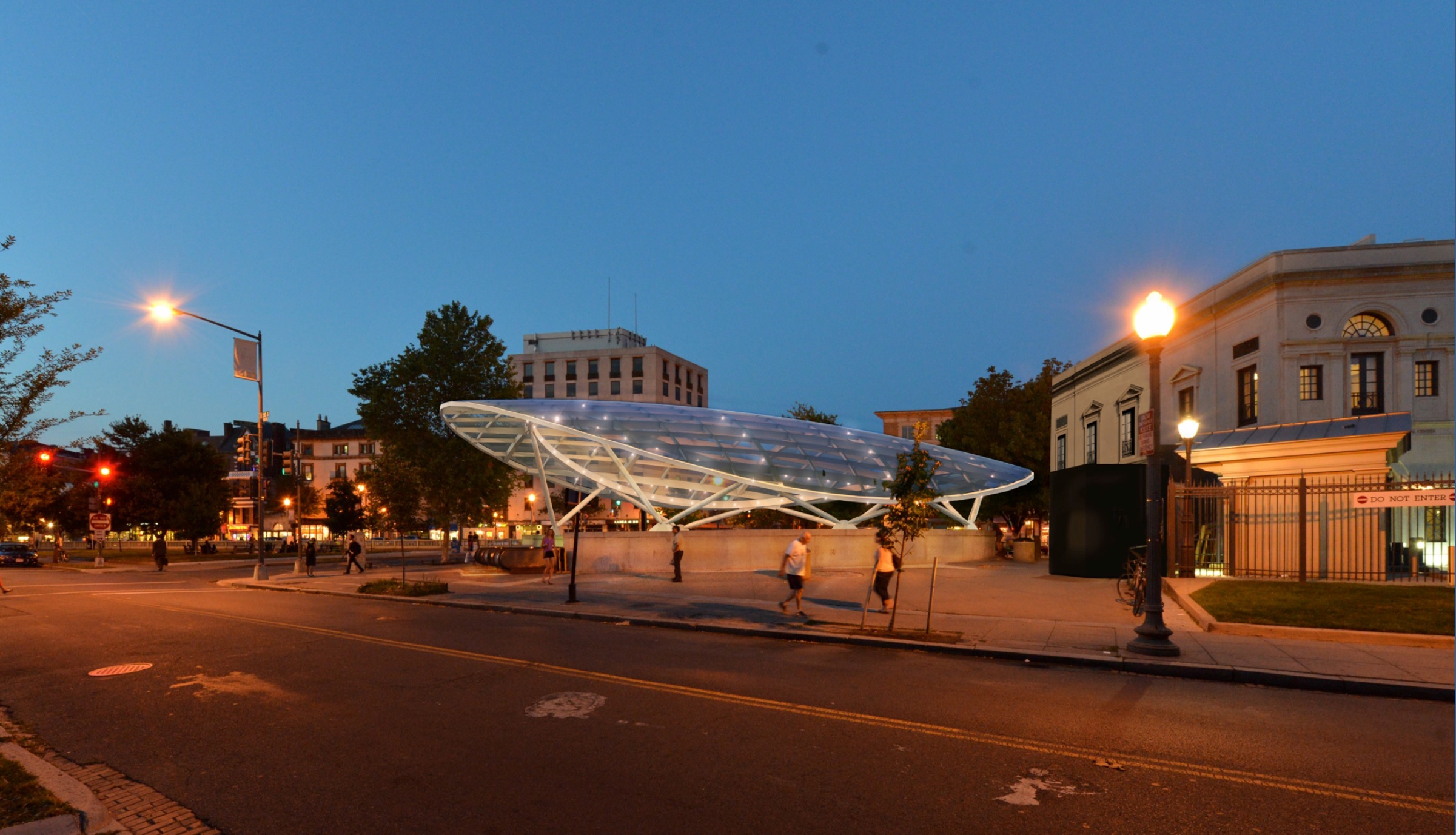 Later this month, Metro will begin work to install a specially designed canopy over the north entrance of Dupont Circle station, the transit authority announced today. The canopy will enhance safety and convenience by protecting riders from precipitation on the system’s sixth longest escalators, which are 190 feet long and rise 95 vertical feet from the station mezzanine to street level.

When installation is complete early next year, the canopy will protect customers and the escalators themselves from the negative impacts of rain, ice, and snow, which have fallen into the original escalators since the station opened in 1977. Current escalator regulations require that any new escalators be covered from the elements, so installation of a canopy will allow for the eventual replacement of the escalators when they reach the end of their useful current service life.

Dupont Circle’s north entrance’s unique size and shape posed an engineering and design challenge because it is significantly larger than other Metro station entrances. The canopy structure will consist of 13 pre-fabricated steel frame modules, connected with bolted joints and supported by seven base brackets resting on the parapet wall. More than 200 individually framed glass panels will form an elliptical canopy 97 feet long by 82 feet wide. Multiple light fixtures will be integrated into the canopy to provide ambient lighting, highlighting the structure and illuminating the iconic Walt Whitman inscription on the parapet wall below.

Despite its size, the new canopy will remain true to the original design that was selected in a 2001 competition and is inspired by underground Metro stations’ concrete vaults. When installation of the Dupont north canopy is complete, canopies with this vaulted glass and steel design will cover 40 station entrances throughout the system.

The station entrance will remain open to Metrorail riders during installation with some modifications to pedestrian flow. Construction will require the temporary relocation of bike racks and lockers, as well as the temporary removal of about a dozen trees, which will be replaced when construction allows.

“The new escalator canopy at Dupont Circle will improve the Metro experience for 15,000 customers each day, enhance safety, and further improve escalator reliability,” said Metro General Manager and Chief Executive Officer Paul J. Wiedefeld. “This is the type of long-range capital project we can now advance thanks to dedicated funding provided by Washington, DC, Virginia and Maryland.”

As part of the project, modifications will be made to accommodate a future Art in Transit installation that will replace the planters framing the escalators. Metro’s Art in Transit program will seek submissions from artists for the project via a public submission period and work with the community to identify an artwork installation that enhances the station and complements the iconic design of the entrance.

Escalator canopies were not part of the original design for Metro, but escalator reliability challenges following decades of weather exposure led Metro to begin installing canopies in 2003. Metro is finalizing plans to install canopies at nine remaining entrances, working closely with the National Park Service, National Capital Planning Commission, and the Commission of Fine Arts. The new canopies will protect recent capital investments, including newly installed escalators at Judiciary Square and U Street stations.