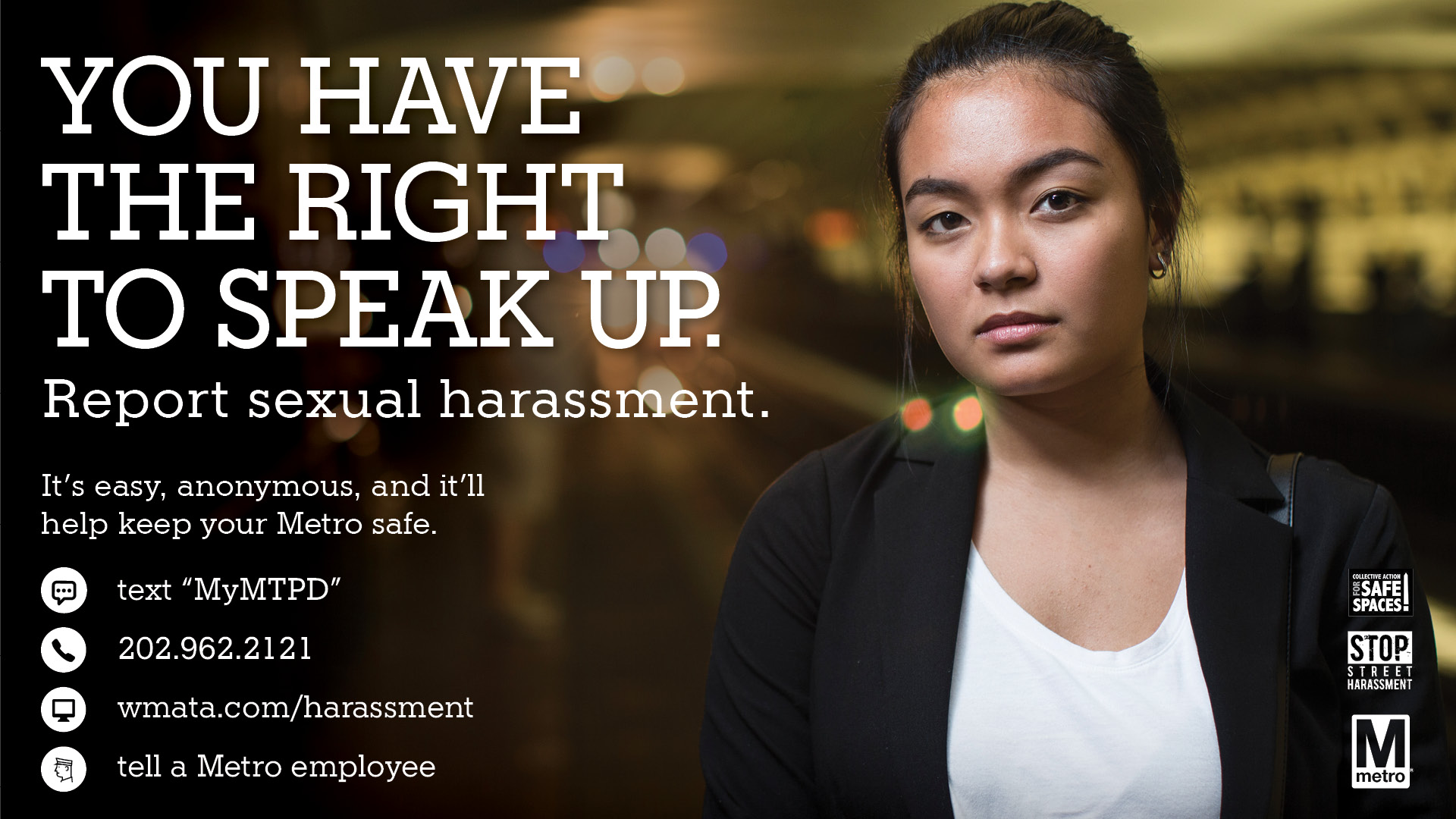 On Wednesday, April 11, Metro Transit Police and volunteers with Collective Action for Safe Spaces (CASS) and Stop Street Harassment will be at several Metro stations across the region to provide information to customers about how to report incidents of sexual harassment.

"Metro has a long-standing partnership with advocates in the community that lets riders know everyone on our trains, buses and in stations deserves to be treated with respect and that they have a right to speak up if they feel they're being harassed," said Metro Transit Police Chief Ron Pavlik. "Through these efforts, we are increasing awareness and reporting when an incident occurs.”

In an effort to heighten awareness, Metro Transit Police will conduct a high visibility outreach event on Wednesday from 4:30 p.m. - 6:30 p.m. at the following stations:

The outreach is part of a multi-tiered approach to raising awareness and preventing sexual harassment, including tools for reporting incidents, high tech cameras and policing tactics to make arrests, and an extensive public service campaign on buses, trains and in stations that encourages customers to report incidents.

Riders may also report incidents online at wmata.com/harassment or by email to harassment@wmata.com.

The survey, developed in partnership with CASS and Stop Street Harassment, builds on the survey first done two years ago to measure the effectiveness of Metro’s public outreach campaign, customer awareness of options to report harassment and how often victims report incidents that occur on Metro.

"Sexual harassment ranges from verbal to physical and is a significant problem on transit systems nationwide,” said Stop Street Harassment Founder and Executive Director Holly Kearl. “I'm proud that WMATA is undertaking various efforts to curb it on their system -- and I'm encouraged to see from the latest survey that the campaign is successfully encouraging more people to speak out and report harassment that they experience or witness."

In addition, the 2018 survey also looked at the reasons why some victims and witnesses do not report harassment. Some of the main reasons cited were that victims were unsure if anything could be done, did not consider the offense serious enough or just wanted to escape the situation.

"We appreciate the steps that WMATA has taken to address this problem on Metro, and we know there's still plenty of work to do together,” said Collective Action for Safe Spaces Deputy Director, Chantal Coudoux. “Harassment is not a normal everyday nuisance; it impacts too many of us in different and real ways. Reporting harassment is important because it allows us to understand the problem in more depth in order to come up with solutions that help build a safer transit system and public spaces broadly."

The report represents the findings of a 1,000 person, regionally representative survey conducted in March by a third-party vendor. View the report, Understanding Sexual Harassment on Public Transportation – 2018, for additional survey results.