Why all this change?

Over the last year, Metro received close to 30,000 responses from customers about proposed changes to fares, service and hours. This feedback was considered by Metro's Board and Management to make tough decisions on how to rightsize service, close a budget gap and provide needed time for preventive maintenance and get Metro Back2Good.

Metrorail hours will be adjusted and some Metrobus routes will add trips to accommodate riders.

Trips will be added on the following bus routes to provide service in key corridors that no longer have late night or early weekend rail service.

Many bus routes serve Downtown DC late at night and on weekends. Check out the District of Columbia late night bus map for Metrobus and DC Circulator routes that operate until 2AM or later. 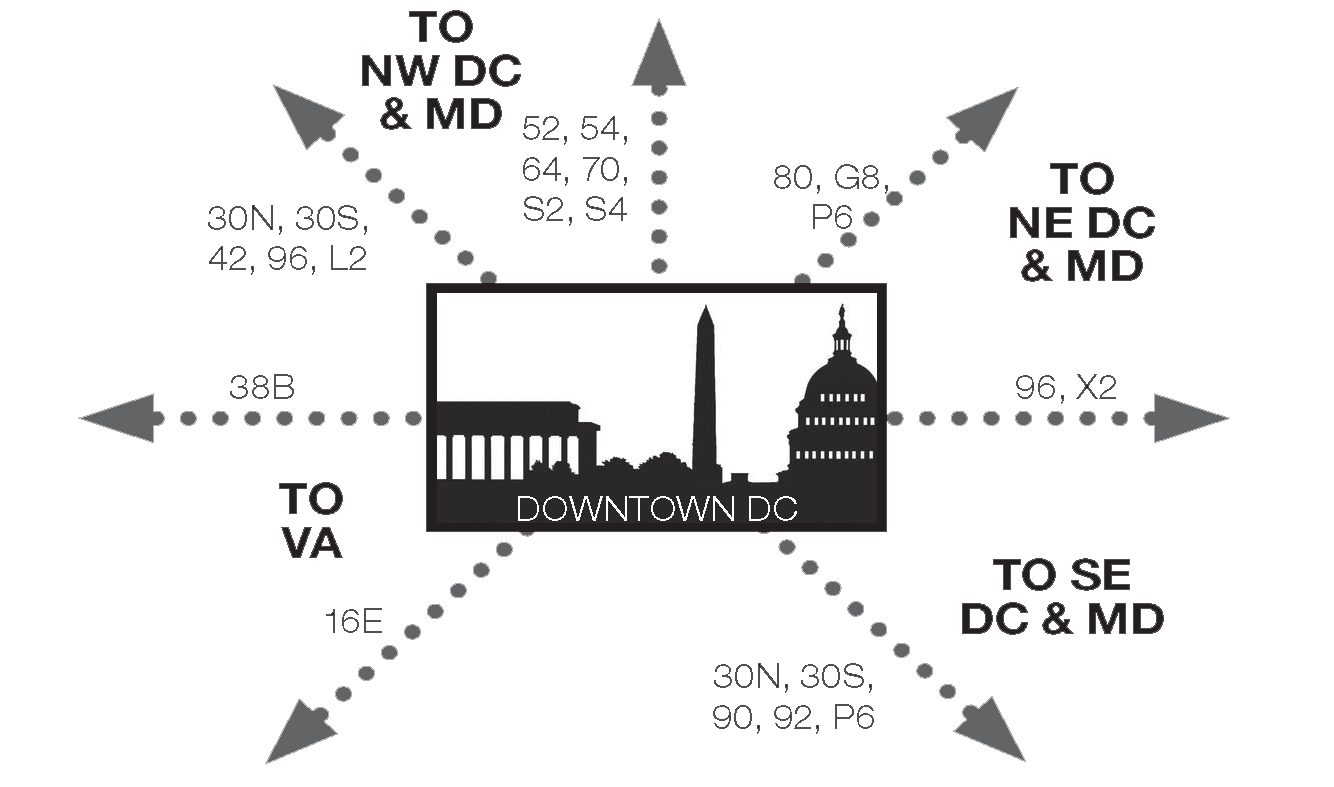 A 7-Day Regional Bus Pass in your hand means more money in your pocket. For just $17.50, it starts saving you money after just nine regular fare bus trips.

Senior Citizens and People with Disabilities

MetroAccess fares are two times the fastest comparable fixed-route rate. The maximum charge of $6.50 will stay the same.

Trains will run every 8 minutes on each line during weekday rush periods.

You'll see some of the changes on the new map. 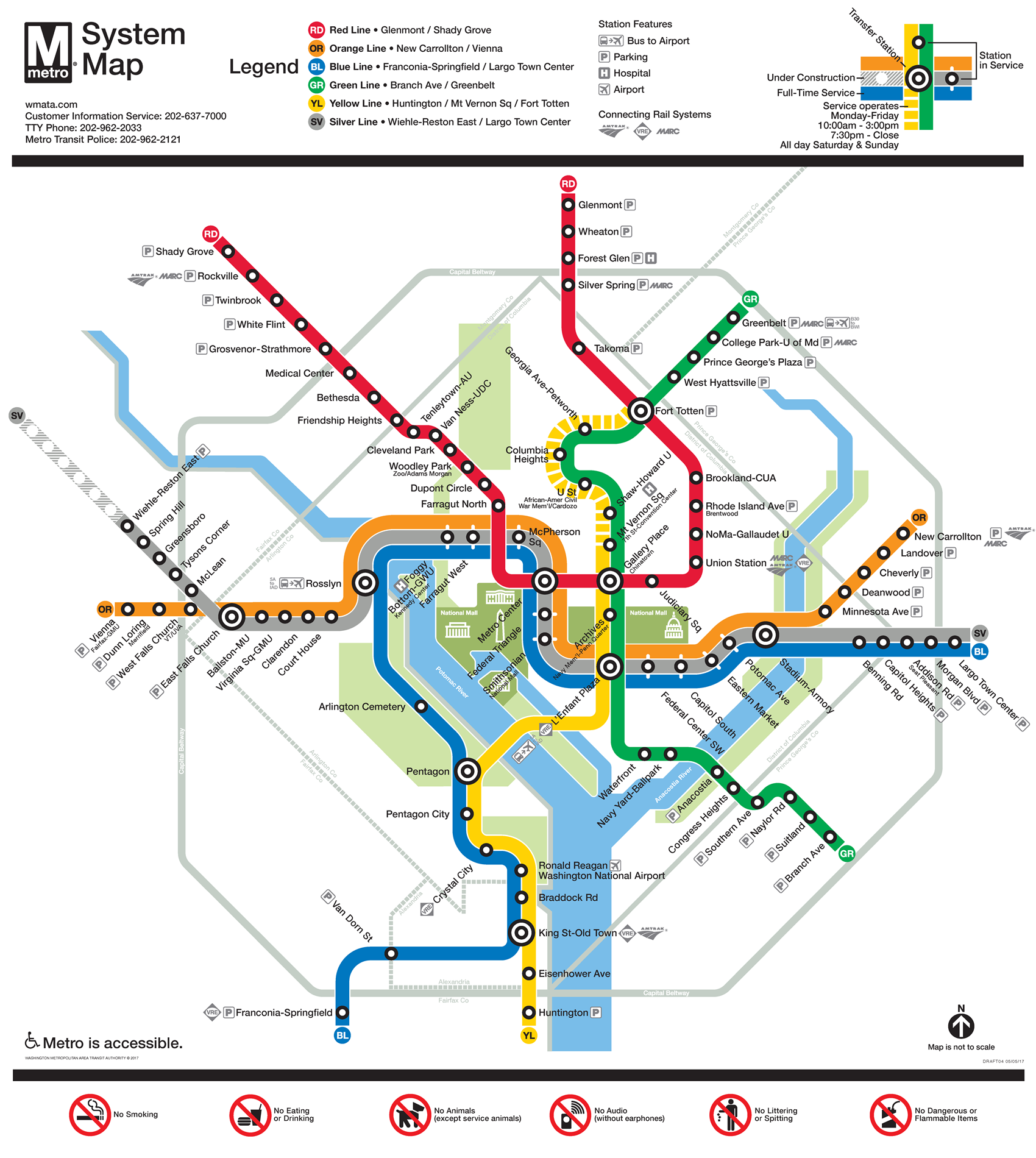 The following routes will have new timetables that reflect schedule changes, added or discontinued trips, or trip time adjustments.

* See additional service change information about these routes below.

Service on the following bus routes will be changed or eliminated. Changes may impact service to some bus stops and Metrorail stations.

S2, S4 16th Street
S9 16th Street Limited
Route S2 and S4 service will be simplified, with most trips operating between Federal Triangle and Silver Spring. Service at stops along 14th Street NW will be discontinued, with alternate service available on Route S1. Additional Route S9 limited-stop trips will be added to the schedule, including trips between 16th Street & Missouri Avenue NW and Franklin Square during morning rush hour; and between Franklin Square and 16th Street & Colorado Avenue NW during afternoon rush hour.

B30 Greenbelt-BWI Airport
On weekdays, the time between buses will change from every 40 minutes to every 60 minutes. Saturday and Sunday service will be eliminated.

W13, W14 Bock Road
Route W13 trips will be replaced by Route W14 trips operating between Southern Avenue Metrorail Station, Friendly, and Fort Washington Forest. (Some trips will continue to begin and end at Friendly.) Regular fare will be charged on all trips.

17A, 17B, 17F, 17M Kings Park
Route 17B trips will be changed to operate between Burke Centre VRE Park & Ride and Pentagon Metrorail Station. Route 17B service to Kings Park West (Zion Drive, Sideburn Road and Commonwealth Boulevard) will be discontinued. The Kings Park Line will be renamed Kings Park-North Springfield Line. Routes 17A and 17F will be eliminated. Travel alternatives: Metrobus 17B, 17G, 17H, 17K, 17L, 17M; Fairfax Connector 306, 401, 402.

REX Richmond Highway Express
Weekday service will extend to the Fort Belvoir Post Exchange/Commissary via Gunston Road. Service to Jackson Loop will be discontinued. Nearby stops will be served along Gunston Road at 5th Street.