Serving customers during the first week of the Platform Improvement Project

Data shows that Metro is serving up to 60% of normal rail ridership in the impacted area through our shuttle bus operation. Rail ridership at the six closed stations in late May is normally about 17,000 entries in the morning peak period and 57,000 entries plus exits all day. With bus shuttle ridership totaling between 26,000-34,000 boardings per day, this equates to a 45-60% retention rate.
On the Metrorail system, weekday ridership has fallen to zero at the six closed stations but has grown by around 10,500 entries at the stations served by the shuttle buses and other bus alternatives: National Airport, Crystal City, Pentagon City and Pentagon. This equates to a 35-40% retention rate in the rail system. 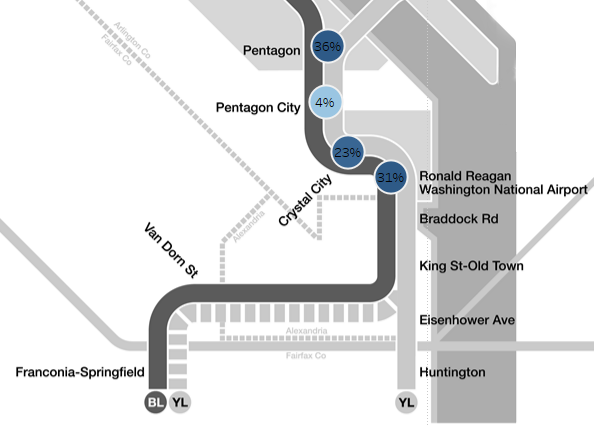 Rail ridership in the morning peak hours has nearly doubled at Pentagon and Reagan National Airport stations due to the concentrated shuttle bus activity. With three Express shuttles terminating at Pentagon, an extra 2,000 customers have been entering Pentagon Station between 8:00 and 9:00 a.m., which suggests our bus shuttles have been reaching a headway of two minutes or less during that time.

No issues with additional crowding on-board Blue and Yellow Line trains have been observed. Average passengers per car (PPC) has largely remained under 100 and trains have not been too full to board. Some customers’ travel times appear to have shifted later as bus shuttles have added travel time - passenger loads were down between 7:00-8:00 a.m., but up in the 8:30-9:00 a.m. timeframe.

The Yellow Line has begun operating to Greenbelt at all times, which has doubled service and halved average wait times on platforms for Green Line customers (who can now take either Yellow or Green) and has created a new one-seat ride to/from Virginia. In the morning, crowding on southbound trains at Shaw (the maximum load point) has been reduced by half, falling from 110 to 54 PPC on the first weekday. The new Yellow Line to Greenbelt service is cutting wait times in half for 56,000 passenger trips per weekday, who now have the option of a Yellow Line train where they previously had only Green. In addition, the new service has created a new one-seat ride to/from Virginia for over 5,000 passenger trips per day.

Data for bus shuttles is a challenge, as they are being operated by a mix of contractors, Alexandria DASH, and Metro, so our typical data systems are not automatically capturing all ridership, speed and other data. Instead, we are receiving data in a more manual way.

Nearby regular bus lines where we added supplemental service (the 10A, 11Y, 21A, 8Z, and Metroway) are up by approximately 34% (by farebox). Those five lines have grown by about 2,000 extra boardings per weekday, with about two-thirds of the growth coming from Metroway (up 36%) and the 11Y Mount Vernon Express (up 105%). Ridership on regular bus lines in the service sector are up nearly 10%. This service has helped relieve pressure from the shuttle buses and has been a good alternative for many impacted customers.