Inside passageway wall and focal wall by fare vending vestibule. 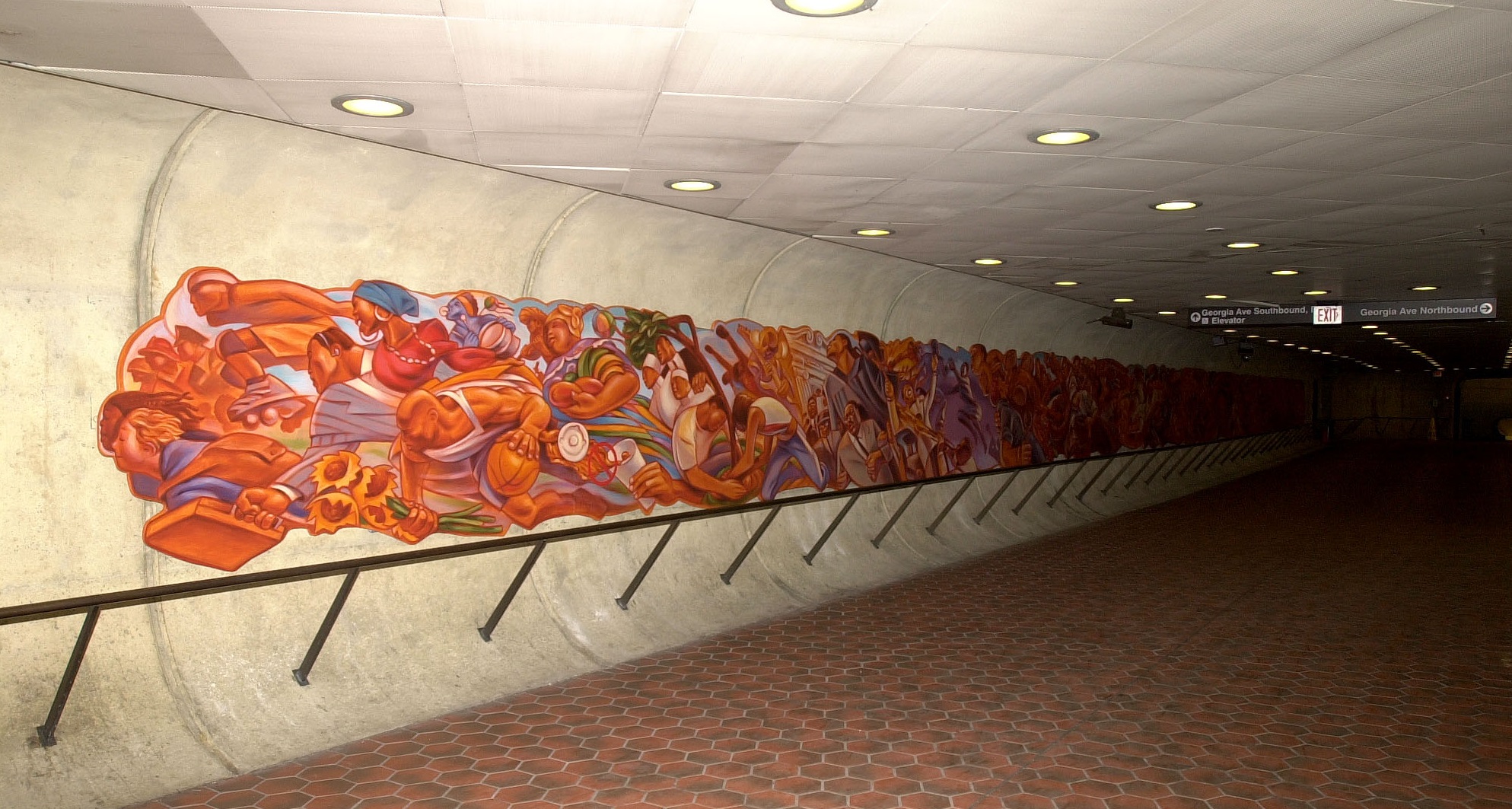 Created by Florida artists Andrew Reid and Carlos Alves, the artwork consists of two components. The 130-foot-long stylized painted mural by Andrew Reid illustrates the rich history of the Georgia Avenue-Petworth community. The bold design of the contoured mural is a flowing chronology of defining events in the community in the context of local and world histories.
The high energy of the handmade clay and cracked tiles of the accompanying frieze, by Carlos Alves, captures the spirit and promise of the community Georgia Avenue-Petworth station.

This project was made possible in part by the DC Commission on the Arts & Humanities.

Andrew Reid achieved renown as a graphic artist in his native New Zealand and New York before moving to Miami in 1991. Since that time he has explored a variety of media, including painted and carve murals, sculpture and three-dimensional wall pieces. The piece "March of Progress" is designed to provide insight into the breadth and depth of Red Rocks and engage visitors; spurring them onto a voyage of discovery.

Carlos Alves has been serious about art since he was a child, and it shows in his passion for making things out of clay, glass, metal, salvaged artifacts, and recycled objects. Drawing from his Cuban roots and his Miami, Florida upbringing, Carlos' themes encompass love, hope, history, culture, politics, nature and a kinship with the sea. He graduated with a BFA from the University of Miami, an MFA from Illinois State University, and received a scholarship to the Lorenzo de' Medici School (Scuola Lorenzo de' Medici) in Florence, Italy.

This large bronze sculpture rests atop a two-step platform and is inscribed with the following poem by E. Ethelbert Miller:

This project was made possible in part by the DC Commission on the Arts & Humanities and was donated to WMATA.

Lisa Scheer works and lives in Maryland and Washington, D.C. She received a BA from Bennington College and an MFA in sculpture from Yale University. New Leaf is representative of Lisa Scheer's work - primarily large-scale abstract sculptures constructed out of metal and fabricated sheet metal.

Scheer said, "My goal is to have a mixture of really interesting references, oftentimes stemming from the sort of program or the site in which I'm installing the work. The piece at Petworth is a sort of abstracted form, but it also looks a tremendous amount like a leaf, or something very organic and growing, and I do mean to do that because I mean to evoke metaphors of growth and change and seasonal time shifts."

E. Ethelbert Miller is a writer and literary activist. He is the board chair of the Institute for Policy Studies (IPS), a progressive think tank located in Washington, D.C. Miller is the founder and former chair of the Humanities Council of Washington, D.C. "E. Ethelbert Miller Day" was proclaimed in D.C. on September 28, 1978. In 2003 Miller's poems were selected for sculpture installations at the Petworth and DuPont Circle Metro stations. On April 19, 2015, Mr. Miller was inducted into the Washington DC Hall of Fame.