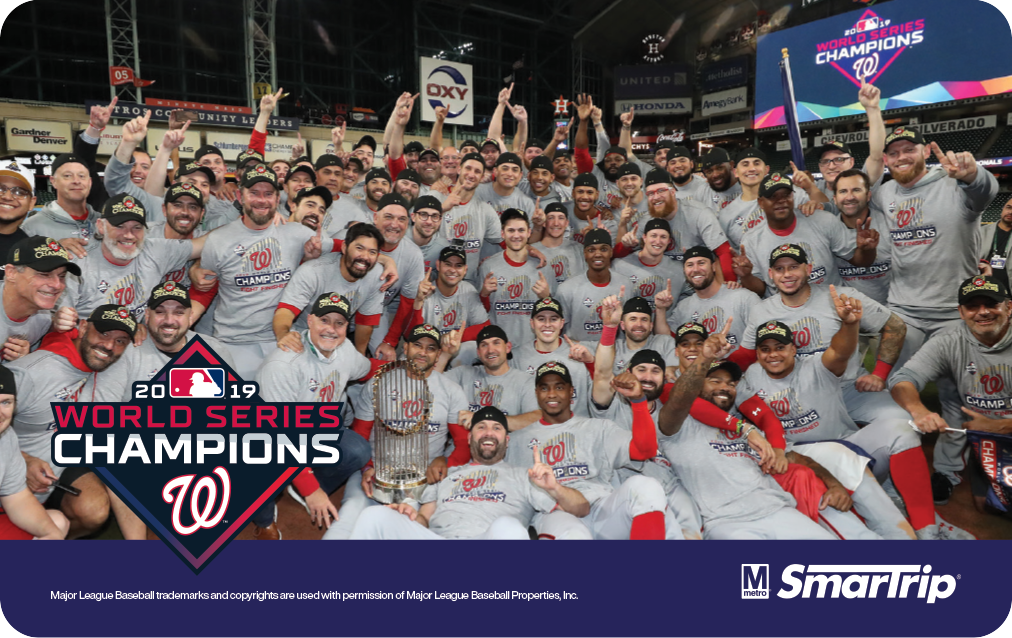 Nationals fans can relive the team’s thrilling come-from-behind victory every time they ride Metro with a limited-edition SmarTrip card commemorating the Nats’ World Series Championship, the first in the team’s history.

“We are proud to have supported the Nationals and their fans during this incredible postseason,” said Metro General Manager and Chief Executive Officer Paul J. Wiedefeld. “Now, in what is becoming a ‘Sports Capital’ tradition, it’s our great honor to present the team with their own championship SmarTrip card on behalf of a proud and grateful region.”

Metro obtained permission from the Nationals and Major League Baseball to produce a limited number of cards using a photo of the Nationals with the Commissioner’s trophy taken on the field immediately after winning the World Series. The cards will be sold online only while supplies last.

Available starting today exclusively at wmata.com/nationalscard, the Nationals Commemorative Card will be sold for $10 and comes preloaded with $8 in Metro fare. (As with all SmarTrip cards, Metro charges $2 for to cover the cost of production.) There are no shipping or handling charges, and fans are asked to allow 4-6 weeks for delivery.

Customers who already have a SmarTrip card can transfer any fare value or transit benefits to their new Nationals Commemorative Card by visiting SmarTrip.wmata.com.

Creating special SmarTrip cards to celebrate DC sports championships is a practice that began with a tweet. On June 5, 2018, after Caps right winger T.J. Oshie surprised Orange Line riders by taking Metro to games 3 and 4 of the Stanley Cup finals, Metro tweeted: “Hey @tjoshie77! Congrats on an amazing win! Bring home the #StanleyCup and we're gonna make a commemorative smartrip card in your honor!” The team went on to win the Stanley Cup.

Last month, the Mystics won the WNBA Championship, and Metro will release a commemorative SmarTrip card in their honor during the team’s official celebration next spring.