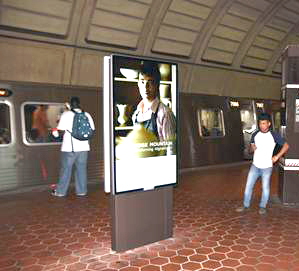 “The new digital ad displays provide a dynamic new platform for our advertisers and have the potential to generate new revenue that will help support the essential rail and bus services that Metro provides to the region," said Metro General Manager Paul J. Wiedefeld. "We look forward to adding more of these new high-tech screens throughout the system."

The new screens were funded by OUTFRONT at no cost to Metro. Digital ads will rotate in 5, 10 and 15 second intervals, allowing Metro to maximize advertising revenue with multiple advertisements on each screen. The screens will also be used for emergency communications to passengers.

The 65-inch vertical screens have been installed over several weeks, with crews working through the night to remove the old backlit static ad displays and install the new brackets to support the flat panel displays.  Two digital panel displays have been mounted at each of the 14 stations, one panel facing on each side of the platform.

The displays utilize the ON Smart Digital Platform, featuring technology capable of running full-motion digital ads and provide advertisers the ability to remotely choose when to run ads for targeted audiences.

"We are excited to expand on our partnership with Metro, which will help digitize and modernize the Metro transit stations for advertisers to reach consumers in new ways," said Andy Sriubas, Executive Vice President, Strategic Planning & Development, OUTFRONT Media. "Building on our successful installations at the Green Line’s Navy Yard station earlier this year, the expansion will further connect our ON Smart Media platform with the vital D.C. audience. The vibrant look of these billboards offers advertisers a network of attention grabbing displays, continuing our approach of offering innovative out of home ads at scale.”

The new digital screens are installed at the following stations:

Current advertisers on the digital displays already include:

Metro expects to install 22 more digital displays by the end of 2016.