Investigators identify heat kink as probable cause of Friday derailment 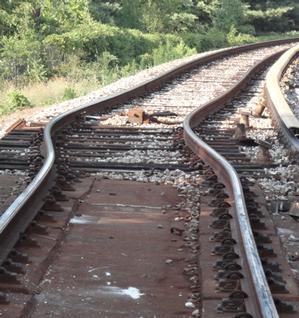 Investigators have determined that a misalignment of the rails, known as a "heat kink," was a probable cause of yesterday's derailment near West Hyattsville Station. Three cars of an inbound Green Line train derailed at approximately 4:45 p.m. as the train entered a tunnel from an outdoor section of track. There were no injuries.

Heat kinks are short sections of misaligned track caused by the expansion of metal rails in extremely high temperatures and prolonged exposure to direct sunlight. When the expanding rail cannot be constrained by cross-ties and ballast, the rail may expand outward from the normal track alignment.

The investigation continues, including work to identify any contributing factors.

Green Line service between Fort Totten and Prince George's Plaza will remain suspended throughout the day Saturday as Metro crews work to re-rail the derailed cars and repair damaged track, third rail and fasteners in the area of the incident. Track work on all other lines has been cancelled this weekend.

Until rail service is restored, free shuttle buses will continue to operate between Fort Totten, West Hyattsville and Prince George's Plaza stations. Customers traveling through this area should allow about 30 minutes of additional travel time.

Normal service is expected to be restored for Monday morning's commute. Updates will be provided through MetroAlerts throughout the weekend as repair efforts continue.