Platform-level lighting upgrades completed at 48 underground Metro stations, one year ahead of schedule

The transformation is complete at Metro’s 48 underground stations with new, brighter lights that improve visibility and enhance safety and security while reducing energy costs. The lighting upgrades, initially expected to take three years, were completed a year early, resulting in an earlier realization of energy cost savings.

At all underground stations, Metro has installed energy-efficient LED lighting on the platforms, track beds, pylons and parapets. Combined, the new fixtures will reduce energy use by approximately 24,000 MW annually, enough energy to power more than 1,900 homes for a year.

“The transition to better, more energy-efficient lighting represents Metro’s broader approach to sustainability, to look long-term at what is best not only for Metro customers but for the region,” said Metro General Manager/CEO Paul J. Wiedefeld. “The cost savings are critical at a time when the region is facing financial uncertainty with Covid-19 and also furthers our commitment to reducing energy use and the region’s carbon footprint.”

Today, Metro’s underground stations are up to ten times brighter while using a fraction of the energy.

The lighting upgrades required extensive work at each station. Due to the location of lighting in the middle of the tracks at some stations, trains were unable to operate on either track while the work took place and required stations to be closed. Crews worked overnight and weekends, sometimes around the clock to remove the old lighting, run new wiring and install new LED systems.

Looking ahead, Metro will be completing upgrades to exterior station lighting – in parking lots, bus bays, and walkways - to enhance visibility and safety for customers riding rail and bus.

Work is now underway at four Metrorail stations in the District, in partnership with the DC Sustainable Energy Utility (DCSEU). Parking lot and walkway lighting improvements at the Brookland, Congress Heights, Deanwood and Fort Totten stations will benefit 14,000 daily riders and customers on more than 30 bus routes.

The exterior lighting upgrades at the four stations will save 269,000 kWh annually, enough to power 22 homes a year and will reduce carbon emissions by 168 tons. Installation began this month and is expected to be completed by the end of September. 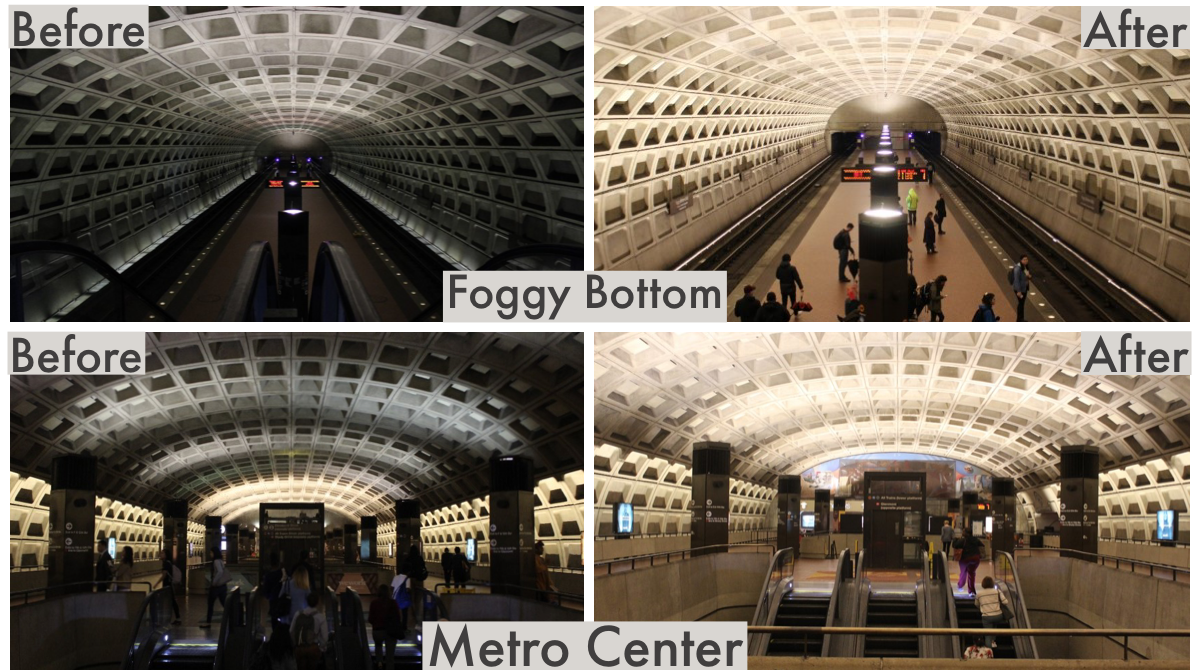