The Metro Board of Directors Finance and Capital Committee today approved a $4.7 billion operating and capital budget for fiscal year 2022 (beginning July 1, 2021) that maintains current service levels and enhancements, while continuing to accelerate Metro’s capital investment in safety-critical repairs and service reliability improvements. The full Board of Directors is expected to approve the Committee’s recommendation on April 22.

Under the approved $2.07 billion operating budget, Metro will maintain service at 80-85 percent of pre-pandemic levels to support expected ridership growth as the region resumes events, classroom learning, and businesses reopen with increased capacity.

“The impact of the pandemic on ridership and revenue forced us to consider drastic cuts that would have been necessary absent federal relief funding. Thankfully, the American Rescue Plan Act has provided a lifeline for Metro to serve customers and support the region’s economic recovery,” said Metro Board Chair Paul C. Smedberg. “We heard from more than 25,000 people how important affordable and frequent transit is to them, and we will consider those comments carefully as we determine how to allocate the remaining federal support to meet the region’s mobility needs in the coming year and beyond.”

The operating budget also supports planned changes to bus and rail services, including funding for the start of service for Silver Line Phase II and the new Potomac Yard Station. Five Metrobus routes will also be transferred to Fairfax Connector to operate beginning in July.

“We are preparing to welcome back customers as part of a return to normalcy, and welcome new customers who have long awaited the convenience of the Silver Line and new stations serving their communities and workplaces,” said General Manager and CEO Paul J. Wiedefeld. “I am especially looking forward to beginning rail service to Dulles Airport as people resume travel to and from the nation’s capital as one of the great destinations in this country.”

During FY2022, Metro will continue an aggressive rebuilding campaign as part of its $2.6 billion capital budget that invests in safety and service improvements, critical repairs to platforms and structures, and system state of good repair needs.

For example, Metro’s Platform Improvement Project will complete platform rehabilitation work at Green and Yellow line stations this summer, with work at the final stations beginning next year. The four-year project is part of a major initiative to reconstruct 20 deteriorated outdoor platforms and add customer improvements to modernize stations.

In addition, Metro continues to invest in customer improvements including new faregates and fareboxes, parking lot and garage rehabilitation, a multi-year escalator replacement project, and the procurement of new 8000-series railcars.

The FY2022 capital budget is part of Metro’s six-year, $12.3 billion Capital Improvement Program. Over the past four years, Metro has invested more than $5 billion through the capital program, delivering on 95 percent of the capital budget each year.

When the Board gives final approval to the Committee’s recommendation at its meeting on April 22nd, the following service levels will be funded through June 30, 2022: 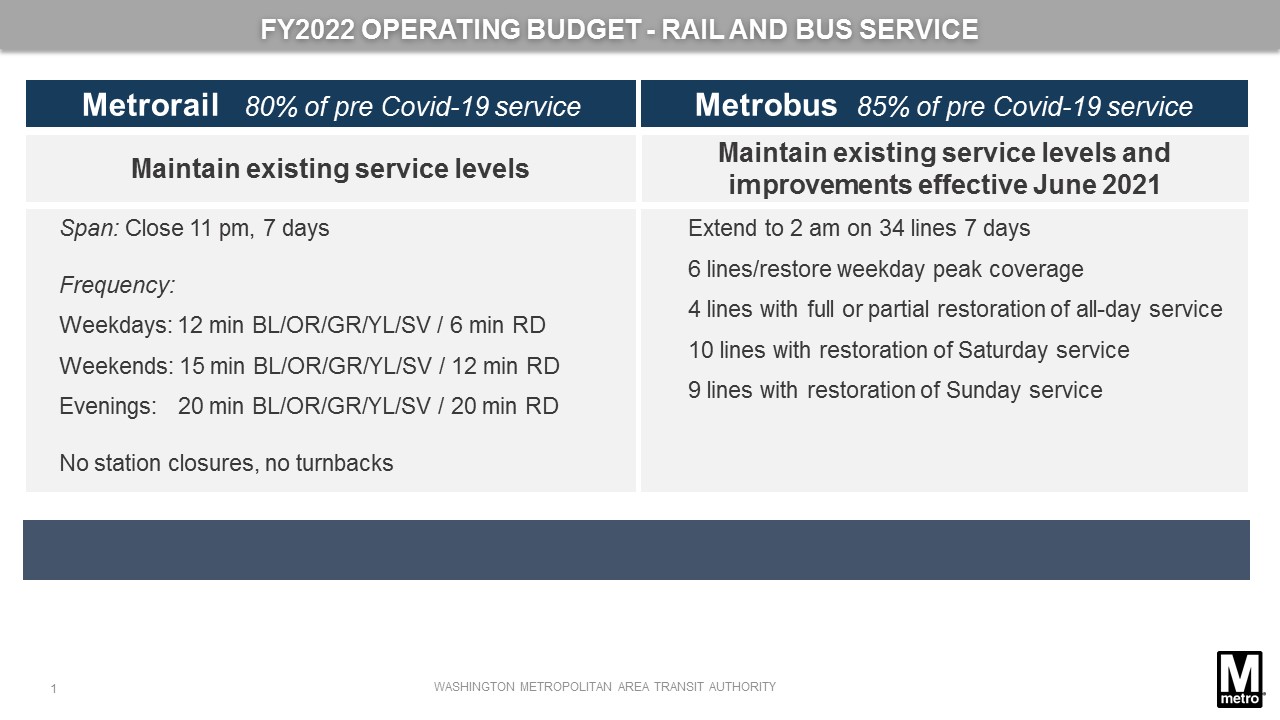